Sometimes back, I ordered 90/45 degrees Dials essential for ‘Uranian Astrology’. Usually I receive such things (by ordinary post) within 25-30 days. But it has been 50 days+ still there was no show! I got worried. What could have happened with this parcel? Had it been lost in the transit or stolen at the post office? Several things started circling my mind. Finally I decided to use KP Horary to find out “Dials when?” and as usual KP Horary answered the query in crisp, accurate and candid words!

To be frank, I personally don’t like Horary to be used for such sundry reasons. In fact several times in the past I have declined to answer queries of such sundry nature, my reasoning is pretty clear. Horary answer is a Divine help, use it sparingly, only when there is “back against the wall’ kind of situation. Using it for some paltry reason is misuse of the facility and moreover it is a mockery of the Divine powers. So my sincere appeal to all is that use this Divine help only for something really critical if not life threatening.

Anyway, this time, though sundry was the query, I couldn’t resist the temptation to use Horary. I hope, the Divine powers excuse me for this offense!

Horary number can be generated by number of ways. Most popular one is asking a number from the client himself/herself. Second option is to use a 300 pager book and ask the client to turn a random page from the book; the page number is the Horary number. One more method is to generate a Random number using Computer or calculator. Most Astrology programs do provide a facility to generate a random number, the software I use for my practice (KP Star One) does have this facility built in. And the last approach is not to use any Horary number, just take the time when the query is asked (and understood by the Astrologer) and construct the chart as usual.

For my case, I used Random number generator (the reason is . being an Astrologer , I might knowingly, unknowing manipulate the number!)

The Horary chart constructed for the query is shown below.

Being my own query, it is not required to check ‘Whether the query is genuine or not’ or ‘Whether there is real urge to know the answer’ etc. But rules are rules, so let us follow all the procedures, no shortcuts here.

In KP Horary it is important to decide the Principle House and other supporting house related to query, this is an important step and very critical, any mistakes in understanding the query will give wrong houses and that at the end would result in a wrong answer.

Going by the past experience of that overseas merchant, I was damn sure that he had indeed shipped the parcel, Means it is in transit, but the delay in getting that parcel is suggesting that either the parcel is lost somewhere or got stolen. So I decided to treat this query as ‘Lost / Stolen object’.

For ‘Lost and Stolen object’ case, we have to decide a house describing the lost/stolen object. I was expecting a parcel containing some paper and plastic dials plus some hardware. Though it was to come by post, it isn’t a letter or message; it is not a book either. So the usual suspect, the third (3) house is ruled out. I have already paid for these dials, 100% in advance, so I was indeed the owner of these dials, means it is my possession. For personal possessions (except for things like property and animals) second house (2) is used. So I decided to use 2nd house.

For any Horary query first (1) house always represent the querent, while the 7th House represents the opposite party, in our case the thief / person possessing the lost object. Now if I were to recover the goods, the thief must lose it that would also mean his /her loss and my gain. So loss to thief is his/her 12th that 6th in the horary chart. So here comes the 6th House.

And to get the things in my hands is my ardent wish, so the 11th House fulfillment of desire is needed, as always.

So we have 2,6,11 under consideration. Which one to take as a Principle house then?

I was not sure whether that parcel is lost or stolen; it could have been just misplaced or delayed for some unknown reasons. So I was a bit skeptical in using 2nd or 6th as a principle house, so I settled for 11th house which according to me was appropriate for this specific query; I was sincerely interested in getting those dials in my hand for which I had already paid through my nose!

Now the principle house: 11th. Sub of 11th is Moon that we already checked, is favorable. Mon is in star on Saturn which is in direct motion. This clearly indicates that I will be getting those dials in my hand one day or the other.

Just for the curiosity, I checked Subs of 2nd and 6th, for both these house the sub is Saturn, which we know  is  favorable. So ‘Getting these Dials’ is promised. When? For that we need to check Dasa, Bhukti, Antara and Sookshama. So let’s us proceed with that.

At the query time Saturn Dasa was going on till 18 April 2030. We have checked Saturn already,  who is favorable, but now we are considering Saturn as Dasa lord so we must check its Sub, as sub’s nod is very essential. Saturn is in Mon’s Sub, we know Moon is favorable for our query. So Saturn Dasa is favorable. But I was not prepared to wait till 2030! So we must find out a smaller period wherein we could expect a delivery. So move on to the Bhukti level.

In Saturn Dasa, current Bhukti is of Saturn itself running till 22 April 2014. Some 6 months in hand, quite enough for the parcel to reach me. I decided to use this Saturn Bhukti for another reason and that is Dasa of ‘A’ planet and Bhukti of the same ‘A’ planet is always stronger in any case. So we finalize on Saturn Dasa and Saturn Bhukti.

But we have 6 months to go, means further refining to Antara level is called for.

Within Saturn Bhukti we have Rahu’s Antara going on till 27 Nov 2013. One full month, enough time for dials to reach me, this Rahu Antara might work for us as Nodes are always stronger but we shouldn’t take anything for granted. Let’s check Rahu.

Rahu is in 2nd, Rahu is conjoined by Mercury, Saturn and the Sun.

Saturn we already knew signifies 2, 5 and 6,

If we add all this together we see that Rahu is favorable for us. Rahu ’s Sub is Mercury, Mercury through its own significance as well as through significances of conjunct Saturn and Sun, is favorable, only hitch is, it is retrograde at this moment, but will go direct by 11th November.

So Rahu Antara might work. But 30 days to go, and saying that I would be getting those dials in a month’s time is a very broad prediction, not in line with what KP is famous for. So let us go further deep into Sookshama level.

In Rahu ’s Antara there are three Sookshama in balance.

First one (that is the current one) is of SUN running till 3rd November 2013, but we have seen that SUN is not favorable for us being lord of 12th; its Sub is Jupiter that favors the thief as Jupiter is significator of 7th house. So we can’t take SUN Sookshama.

Next one to come is of MOON running till 16th November 2013, we know very well that Moon is very good and might work for us.

Mars is in 12th, Lord of 3rd and 8th in the Star of Ketu who is in 8th. This clearly shows that Mars is not the guy we should seek help from.

With the Moon Sookshama, we now have our chain ready as: Saturn-Saturn Rahu-Moon and our time frame comes to 3rd November 2013 to 17 November 2013

Incidentally I looked at the ruling planets at that moment:

Saturn appeared twice in RP so in our chain too. Moon is there, we too have taken Moon, although Sun is in RP we have seen that it is not suitable for us. Rahu already in RP and our chain too,  while Mars is not there. Venus is there in RP but Rahu represents Venus,

RPs also supported what we have worked out so far.

Now we need the final approval from the High Command that is  approval by the transits.

As we have narrowed down the time frame to only 14 days, I decided to use Transit of Moon for this case. We need to look for any Sign – Star combo amongst the planets in the chain viz Saturn/Moon/Rahu/ Venus (Rahu doesn’t  own a sign so we have to use his sign lord)

On 3rd November, the Moon will be in Libra, Venus is the Sign lord, Rahu represents Venus, OK but in Libra there is no Saturn or Moon stars to make the pair. Libra is not for us. The Moon then moves to Scorpio and then to Sagittarius, both signs ruled by Mars and Jupiter resp. as Mars and Jupiter are not in our chain, combo won’t form.

We need to go further. The Moon then enter Capricorn, ruled by Saturn and in Capricorn we have Moon star so we got a SAT – MON pair, this will happen on 9th November , well within our time frame. But the Moon will continue to advance and will enter Aquarius another sign ruled by Saturn, here we have Rahu ’s star, SAT – RAH pair will also work, the date will be 11th November , this is also within our time frame.

Now we have real dilemma, 9th November or 11 November?

Mercury who was retrograde at the query time will still be in retrograde  motion on 9th November, this is not a good sign as Mercury is significator of message, communication and further Sub of Rahu the Antara lord.

Mercury turns direct on 11th early morning, and that is our day of choice too. Second reason is :  Nodes are always stronger and should be given preference.

So I selected Saturn Rahu combo happening on 11th November. As the Moon will be in the Rahu ’s star for the whole day of 11th November, I was pretty sure that my dials would reach me on this day.

And indeed it happened. On 11th November, postman delivered me the packet containing those dials. I just noted the time; it was 14:17. I quickly checked the Ascendant at that precise time and see it was Saturn-Rahu-Moon exactly the same combo we worked out for our Dasa-Bhukti-Antara, the day was Monday means again the Moon!!

My respects to our Guruji K S Krishnamurti.

Have a question, a comment? Want to collaborate in some way? Just have something nice to say? I’d love to hear from you! Shoot me a message by filling up the contact form provided at the bottom of this page. I’ll be sure to get back to you as soon as I can. Thanks!
Like 0 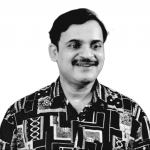 Have a question, a comment? Want to collaborate in some way? Just have something nice to say? I’d love to hear from you! Shoot me a message by filling up the contact form provided at the bottom of this page. I’ll be sure to get back to you as soon as I can. Thanks!

On 4 February 2013, Neha consulted me regarding her marriage.…